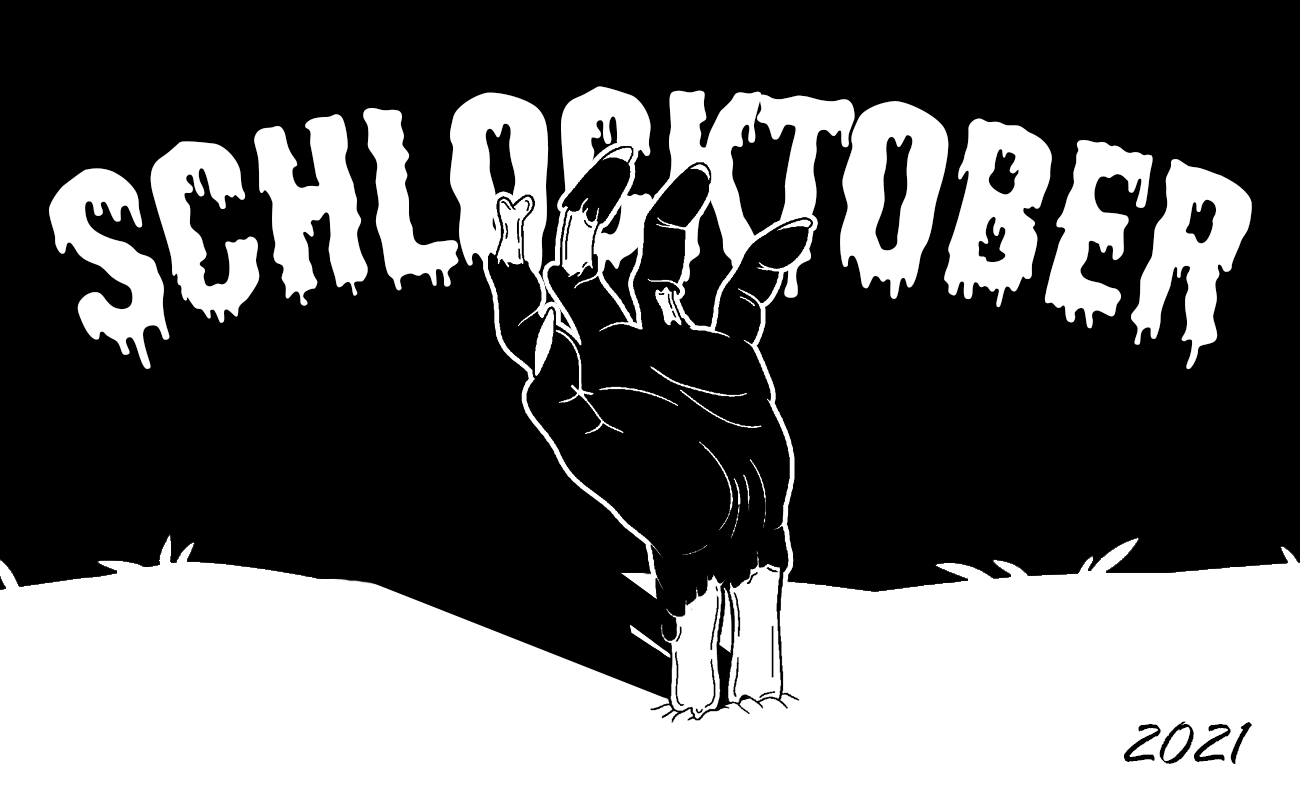 Where in Week 1 I averaged writing about 900 words a day, that number plummeted to only a couple hundred words a day for Week 2. The primary reason for this sudden change is that my attentions – and a lot of the time that I blocked out for Schlocktober-related writing – have largely been subsumed by a couple of large-scale work projects for my day job. As the looming deadlines for those projects grow nearer, I’ve found myself fixating on, and iterating upon, the work I’ve been doing for those projects more, and so fun prompt writing has necessarily taken a bit of a back seat for the moment.

The unfortunate result of this shift in focus is that I have nothing that I feel particularly fond of sharing from my Schlocktober 2021 Week 2 writing, and a lot of the prompts that I was very excited for this past week only made it as far as having some scant outlines created for them. This is, of course, still meaningful writing-related work that I can personally put to use at a later date, but it doesn’t lend itself well to sharing publicly, so I won’t be including any of it here.

I don’t want to leave my interested readers empty-handed this week, though, so I’ve decided to include my response to the Week 1’s GOOP prompt here instead. It’s a short scene, but it was a lot of fun to write, and its one I’ve gone back to a couple times now just to build on a little more.

If you’ve been following this project, I hope you’ll take the time to comment below or reach out via Facebook or Twitter to let me know what you think about each prompt! I’ll be posting the next Schlocktober 2021 recap on October 24, where I’ll discuss how Week 3’s prompts went and share another piece.

The GOOP is outside with William’s body, gyrating slowly as it dissolves his flesh.

At least William is dead. I mean, I hope he is. We haven’t heard any screams from him for a few minutes now, and we can only see his greasy mass of curls bouncing frantically from where we are in the cabin, on account of the fact that he’s got his whole face buried deep in the GOOP’s gelatinous torso. Occasionally, his body bucks against his viscous captor, or the remaining fingers on his hand spring to life and hook the air with blind purpose, but I imagine that the meat is little more than machine now, and that all we’re really witnessing is the grim puppetry of synapses firing for the last time.

Yeah, the GOOP slurped William’s soul right out of its husk like jello out of a cup. The melted remnants of his eyes, his nose, and whatever else it managed to grab ahold of first went along for the same ride, too.

As more of William is peeled away, it becomes easier to imagine that he has just suddenly and irreversibly transformed into a dancing skeleton beneath the light of the moon. The GOOP’s near-translucent shape is well camouflaged in the shadows cast by the pines, only betrayed by the peculiar refraction of light through its body. I imagine that, by day, it slumbers invisibly near tepid, rocky pools, unbothered and unseen by the transient wildlife that inhabit these mountains. At night, it must hunt, and the shrieks and laughter of our skinny dipping excursion must have sounded the dinner bell for it.

At least William got to have a little fun before the end.

Unceremoniously, the GOOP spits out each of William’s bones, one splurch at a time. When all that remains is the upper portion of William’s skull, the GOOP instead claims it as its own, pulling it to the center of its mass and draping the rest of its gluey bulk around it like a sheet ghost. It moves silently up the slope toward the cabin and the rest of us, the hollow sockets of its eyes tracking us with uncanny fluidity. In no time at all, it’s directly out the picture window, its ghastly new visage fixated on our faces.

“We’re safe in here,” Samantha whispers to no one in particular, “as long as everything’s locked up. We need to make sure everything is covered.”

Wordlessly, Roger, Alec, and Dani back away from the window. Alec reaches the front door and clicks the deadlock into place with an audible thunk. The GOOP is immobile, fixated on Samantha and I. Elsewhere in the cabin, windows are cranked shut, objects shifted to block entry points.

The GOOP seems to consider Samantha’s words. Then, in one fluid motion, it slams the skull into the picture window, showering us with shards of glass. Samantha howls as it heaves its bulk through the fieldstone and logs unimpeded, seizes her body, and rakes her out through the opening with a sickening crack.

From behind me, Alec begins to scream, and I know that none of us are leaving this place alive...